The Influence of the Ffestiniog Railway on the Slate Industry

The speaker at our meeting on 17th May 2018 was Chris Jones, who travelled over 300 miles to deliver a fascinating and richly illustrated talk to a packed audience. Chris was a frequent visitor to North Wales as a child, and a junior member of the Ffestiniog Railway. He has progressed from volunteering on the track at the age of 15 to his current position as driver on the Ffestiniog Railway, and fireman on the Welsh Highland Railway.

The history and development of the Ffestiniog Railway is inextricably linked to the slate industry. Before the railway, slate was transported by packhorses and horse-drawn carts to Porthmadog, where it was loaded onto small boats. Impetus for change was provided by increased slate production following the repeal of slate duty in 1831, and the building of the Cob at Porthmadog (initially for use by road traffic); its construction created a deep channel suitable for shipping. By the early 1830s, a good harbour was developing at Porthmadog, and the railway was under construction. The Ffestiniog Railway was formed, with the Irishman Henry Archer as its first chairman in 1832. Samuel Holland, manager of Holland’s Quarry and later MP for Merioneth, was also a key figure in the railway’s development.

The early effects of the Ffestiniog Railway were soon seen: the population of Blaenau rose from 1,100 in the 1820s to 4,000 in the 1840s, and there were similar increases at Porthmadog too. Annual slate production rose from 18,000 tons in 1835 to 48,000 tons in 1855, with a drop in costs from 15 to 5 shillings per ton. Up till this time, wagons loaded with slate descended from Ffestiniog aided by gravity, and were drawn back up to the mines by teams of horses. However with increasing production and competition amongst mine owners, the horse-drawn system was unable to keep up. Steam was needed, and in the early 1860s, a pioneering narrow-gauge system was developed. The first engine arrived in 1863, and output shot up to 89,000 tons in 1865, with a corresponding growth in the shipbuilding industry at Porthmadog. These very successful advances were powered by locomotives built by George England, of Hatcham in London, pulling carriages built by Brown, Marshalls & Co, with a goods van to take supplies back up the line. Passengers were carried from 1865, the first narrow gauge railway to be allowed to do this and passengers could be met at the middle station, Tan y Bwlch by a horse drawn carriage from the Oakeley Arms Hotel. 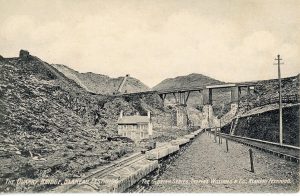 The engineer Charles Spooner and the locomotive designer Robert Fairlie combined forces to produce the famous Double Fairlie ‘Little Wonder’ in 1869. Soon after, the Ffestiniog Railway gained a reputation as the best in the world, with an 8% return on dividends, but more importantly it showcased the possibility of building narrow-gauge railways in difficult terrains. This triggered the creation of similar lines throughout the British Empire, North and South America and Russia, as well as boosting tourism across North Wales. Blaenau benefitted from the building of new houses and a gasworks in about 1870 (in the late 1860s, conditions in Blaenau had been unacceptable, with shift-workers sharing beds and illness rife). However by the end of the 1870s, the first peak in slate demand was over and demand slumped; the monopoly of the Ffestiniog Railway had also been broken, with LNWR and other lines in operation.

The 1880s saw further problems: major rock falls caused a massive reduction in output, followed by cost-cutting, redundancies, and management wage cuts. Only one ship was built at Porthmadog, and the last locomotive of the era was built at Boston Lodge in 1886. The slate industry reached its final peak in production in 1897, but after that, in the years before the first world war, the number of mines declined, and over the years demand was hit by French imports and improvements in tile production. There were further job losses, and the quality of the engines deteriorated.

WW1 accelerated the decline of the slate industry: sea transport was particularly difficult due to U-boat attacks. The Government took over the railway during the war, but it was left in a worse state financially afterwards. It was privately owned again from 1921 – initially by the Dolgarrog Aluminium Company – but struggled through the following decades, its decline exacerbated by poor quality coal, lack of care, natural disasters and the use of lorries for transport. The year-round passenger service had ceased before WW2, when part of the works were taken over for production of tank parts, and slate traffic declined from 54,000 tons in 1934 to 6,400 tons in 1943.

Fortunately, the Ffestiniog Railway revived over time – from 1954, the line was rebuilt, including a 2.5 mile ‘deviation’ around the pumped storage scheme at Tan y Grisiau, built by volunteers. More recently it has revived the Welsh Highland Railway trackbed, adding a further 25-mile railway, also running from Porthmadog. A new terminus is being built at Caernarfon, and the railway is a major tourist attraction, with 250,000 passengers last year. It is fully integrated into the local community, with volunteers, apprentices, a partnership with Coleg Meirion-Dwyfor and about 90 employees.

This is a fascinating story with a happy ending; it now builds its own new locomotives and the carriage works are second to none, using new materials but the original designs, with world-class paintwork and woodwork. Whilst the Ffestiniog Railway no longer enables the slate industry, it is a significant influence on the tourist industry of Gwynedd as a whole.

For those seeking further information, and an opportunity to see some spectacular illustrations, we thoroughly recommend Chris Jones’s forthcoming book Little Giants, co-authored with Peter Dennis, a fellow volunteer.

In the Footsteps of the Roman Legions