Deganwy Pearl Kitchens and other Gems

On Thursday 21st June 2018 several members gathered at the Deganwy Castle Hotel entrance to join a walk around Deganwy led by Adrian and Elan. The topic of the walk was Deganwy Pearl Kitchens and other Gems. It was a beautiful sunny evening so we were eager to learn what gems lay nearby…..

The Deganwy Castle Hotel was originally a 17th Century farmhouse called Tyddyn Deganwy, which was expanded and converted into the Deganwy Castle Hotel in the 1880s following the opening of the railway line to Llandudno in 1858. In 1959 the hotel was acquired by Jess Yates a local entertainer and television presenter who grew up in Llandudno and best known for playing the organ in local theatres. The hotel closed in 2010 and recently has been converted into apartments.

Walking a short distance over the railway line towards Deganwy promenade we stopped at the jetty where in the 19th century, a pleasure steamer would take passengers up the river Conwy to the village of Trefriw. In order to pass safely under the suspension bridge, the funnels on the steamer would be folded down and raised again when on the other side of the bridge.

Further down the promenade we stopped at the recently refurbished shelter. This Victorian shelter was damaged in the Winter storms of 2013/2014, but has now been restored to its former glory thanks to funds and grants from various bodies. 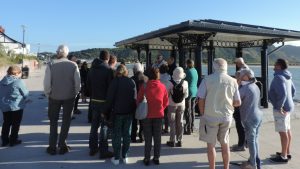 We then crossed the railway over the bridge. The previous one, Elan explained, was an arch construction without steps and was quite difficult to use in wet weather due to the steep climb to the top and precarious slide down to the other side. The present bridge is far more accessible!

On the north side of the bridge is a small car park, the location of the former West Shore Lido. The Lido was opened in 1934 by local businessman R. Arthur Jones, but sadly closed in the 1950s’s when maintenance costs made it too expensive to run. During its lifetime it was very popular with locals and holidaymakers. Walking towards Deganwy, at the junction of York Road and Deganwy Road is a 1930’s art-deco building, formerly a roller skating rink. Today it is used by Robertson Geologging Ltd.

Further along Deganwy Road we paused at the site of the old library where we learned of the pearl fishermen and women who worked in the Pearl Kitchens. Fresh mussels were bought from the River Conwy, boiled in large iron pots, the fish pulp removed (as food for ducks) and the pearls that collect at the bottom were washed and saved. Apparently mussel shells cast aside from this industry were still visible until quite recently, but alas have disappeared making way for new development.

The final stop on the walk was at All Saints’ Church, built on land given by Lord Mostyn and funded by Lady Henrietta Mostyn in memory of her parents the Earl & Countess of Abergavenny. The church was consecrated by the Lord Bishop of St Asaph on All Saints Day, 1st November 1899. 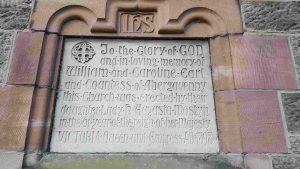 The planned walk is a circular one and continues back to the starting point, but the remaining section will have to be left until another day.

In the Footsteps of the Roman Legions